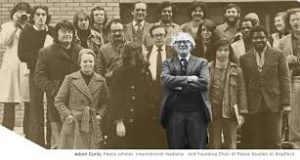 Community Resolve is on the road again next week, heading off to the Adam Curle academic/practitioner meeting hosted by Peace Studies at the University of Bradford, England in early September. So many good ingredients there. Radical peacemaker Curle remains a towering influence in the Peace Studies world, born in 1916 and a man who was

“as much concerned with the human condition in general as with specific conflicts … with all the pain and confusion that impede our unfolding and fulfilment … In this sense the social worker, the teacher, the wise legislator or the good neighbour is just as much a peacemaker as the woman or man unravelling some lethal international imbroglio.”
(Quaker Faith and Practice 24.35)

As he was the first professor of Peace Studies at Bradford (appointed in the 1970s), it is great to see them create this symposium looking at ‘Peaceful relations and the transformation of the world’ in his memory. Community Resolve is just one of many people and groups offering a workshop over the 3 days in a great programme; but what I especially like about the summit is its accessibility. At £5 to register, it is genuine attempt to make the event open to all. If you are really want to create academic–practitioner dialogue, Step 1 is to recognise the huge disparity in resources that people have access to. On the one hand, practitioners increasingly build castles out of air, and on the other, hard-pressed but salaried academics can still lay their hands on cash for travel, hotels and conference attendance fees (on a good day). Thanks Bradford for being so aware and so generous. Very much looking forward to next week’s gathering.